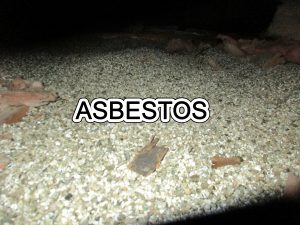 Vermiculite is a mica-like mineral that is mined in many parts of the world, including the United States, South Africa, China, Russia, and Brazil.  Vermiculite is a hydrous, silicate mineral that is classified as a phyllosilicate and that expands greatly when heated. When it is first mined, vermiculite has a crystal-like form that resembles mica. When heated to temperatures above 870° Celsius, however, the water in the crystals evaporates and expands the vermiculite which is known as exfoliating. In this form, vermiculite is light-weight, non-reactive, odourless, fire-resistant, and absorbent.

The vermiculite of main concern was produced by a mine in Libby Montana from the 1920’s to 1990.  I was marketed under many different brand names with Zonolite Attic insulation being one of the most popular ones.  This particular vermiculite insulation was known to contain amphibole asbestos fibers. The government of Canada’s website states that there is no evidence of health risk if the vermiculite contaminated with asbestos is sealed behind wallboards and floorboards or isolated in an attic. Vermiculite was one of four types of loose fill insulation approved for installation under the Canadian Home Insulation Program (CHIP) that provided grants to homeowners who improved home energy efficiency. CHIP was operated by the federal government between 1977 and 1984.

Although the overall percentages of amphibole asbestos in bulk vermiculite are very low, the airborne percentages can increase if the material is disturbed. Asbestos can cause health problems when inhaled into the lungs. Breathing in very small, airborne asbestos fibres has been associated with diseases such as asbestosis, mesothelioma and lung cancer. The best way to minimize asbestos exposure from vermiculite is to NOT remove or disturb the insulation. Moving the vermiculite will cause fibres to become airborne.

Determining if the vermiculite in your home contains asbestos is not easy.  There is no visible method of determining the presence of asbestos and samples have to be sent to a laboratory for testing.  The recommended method is by having an asbestos testing company come into the home and take samples from various areas of the attic to ensure a good representation of the area being tested.  If you want to obtain your own samples and send to the laboratory yourself the cost would be approximately $120.00 for having 4 samples tested. Most people are aware of the dangers of vermiculite containing asbestos and are willing to accept the risks, others would never buy a home which contained contaminated vermiculite.  The Barrie Home inspector regularly finds vermiculite insulation in older homes which has been covered over with blown fiberglass or cellulose which could  hinder or prevent discovery.  Having a professional home inspection can prevent a home buyer from incurring a huge financial expense of removing asbestos contaminated vermiculite after they have bought their home.  Average costs for removing asbestos can range from $8,000 to $15,000 dollars, depending on the size of the home.