Wiring safety codes are intended to protect people and property from electrical shock and fire hazards. Regulations may be established by city, county, provincial/state or national legislation, usually by adopting a model code (with or without local amendments) produced by a technical standards-setting organisation, or by a national standard electrical code.

First Electrical codes arose in the 1880’s with the commercial introduction of electrical power. Many conflicting standards existed for the selection of wire sizes and other design rules for electrical installations.

The first electrical codes in the United States originated in New York in 1881 to regulate installations of electric lighting. Since 1897 the US National Fire Protection Association, a private non-profit association formed by insurance companies, has published the National Electrical Code (NEC). States, counties or cities often include the NEC in their local building codes by reference along with local differences. The NEC is modified every three years. It is a consensus code considering suggestions from interested parties. The proposals are studied by committees of engineers, tradesmen, manufacturer representatives, fire fighters and other invitees.

Although the US and Canadian national standards deal with the same physical phenomena and broadly similar objectives, they differ occasionally in technical detail. As part of the North American Free Trade Agreement(NAFTA) program, US and Canadian standards are slowly converging toward each other, in a process known as harmonization.

The service box includes a circuit breaker which can be used to shut off all the power in the house, or a switch with a handle located on the outside, and the service fuses inside. The cover on the service box is often sealed by the utility.

The service box may stand alone, although in modern homes, the service breaker is often incorporated into the service panel. In either case, it is important that the rating on the box itself, is at least as large as the service entrance cables and fuses or breakers inside. For example, if a house has service entrance wire and fuses rated for 100-amps, a box rated for only 60-amps is not acceptable. More than 60- amps flowing through this box may lead to overheating.

Every home should have a disconnect means so the system can be shut off. Working on a live electrical system is very dangerous. In the U.S. (and in some Canadian situations) it is permitted on existing installations to have up to six switches to disconnect all the house power.

To enable wires to be easily and safely identified, all common wiring safety codes mandate a colour scheme for the insulation on power conductors. In a typical electrical code, some colour-coding is mandatory, while some may be optional.
Service Boxes and Panels

In a conventional 60-amp service with circuit breakers, the breakers will trip when the current in either leg reaches 60-amps. Where fuses are used in the main service box, each fuse works independently. If more than 60-amps flows through one fuse it will blow. This leaves roughly half the house without power, including part of the electric stove, for example. If more than 60-amps flows through the other fuse, it too will blow, leaving the entire house without power.

Federal Pioneer Panel Problems – The Electrical Safety Authority has revised and re-issued a Safety Flash that was originally published in 1997 – their concern is that potential problems might still exist for Federal Pioneer breakers that may not trip! Schneider Canada has announced a voluntary Replacement Program on certain NC015 and NC015CP Breakers. The affected circuit breakers are Federal Pioneer NC015 and NC015CP, Single Pole Rated 15A, Stab-Lok Circuit Breakers – Manufactured between August 1, 1996 and June 11, 1997. These circuit breakers can be identified by a Square / rectangular shaped BLUE colored handle Replacement breakers are identified by a hole drilled in the handle (Blue color) 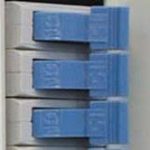 OR Replacement breakers manufactured after January 1, 1999 are identified with a rounded and ribbed handle (Blue color) Check for a square / rectangular handle with a hole, as illustrated or a rounded / ribbed handle – these are OK and not impacted by the recall notice. Breakers with black handles are also OK to use and not impacted by the recall notice. Contractors/Electricians: For any suspect blue-handled circuit breaker replace the breaker and return it to Schneider Electric for full credit, or contact Schneider Electric Customer Care Centre at 1-800-565-6699 or the Schneider Electric Recovery Administration team, at 1-866-333-1490 for additional information. Customers should call their contractor or call Schneider.

Wett Certified for Over 15 Years

Articles You May Enjoy